The World of Soy Sauce

You may be familiar with the sachets of soy (or soya) sauce that come as an accompaniment to take-away food. Beyond this concoction of corn syrup, water, salt, caramel colour, vegetable protein, and sodium benzoate there is an enticing variety of soy sauces made by varied methods and offering a range of interesting and subtly different flavours, aromas and textures.

Asia is the origin of soy sauce and we feature here some of the varieties produced in the far East that we would encourage you to seek out.

Chinese soy sauce can be broadly split into two methods of production: brewed or blended.

Shēng chōu (“fresh drawn”) or Jiàng qīng is a light fresh, thin, opaque sauce brewed by first culturing steamed wheat and soybeans with Aspergillus oryzae molds followed by fermenting the mixture in brine. It is primarily used for seasoning.

Tóu chōu is a ‘premium’ light soy sauce made from the first pressing of the soybeans as the flavour of the first pressing is considered superior. Primarily used for seasoning light dishes and for dipping due to its delicate flavour.

Shuāng huáng is a light soy sauce with a more complex flavour as a result of double fermentation using the light soy sauce from another batch to take the place of brine for a second brewing. This adds further complexity to the flavour. Used primarily for dipping.

Yìn yóu is a darker soy sauce produced by steamed soybeans with aspergillus mixed with coarse rock salt before undergoing prolonged dry fermentation. The flavour is complex and rich and is used for dipping or in “red” (hong) cooking. Brewed primarily in Taiwan. 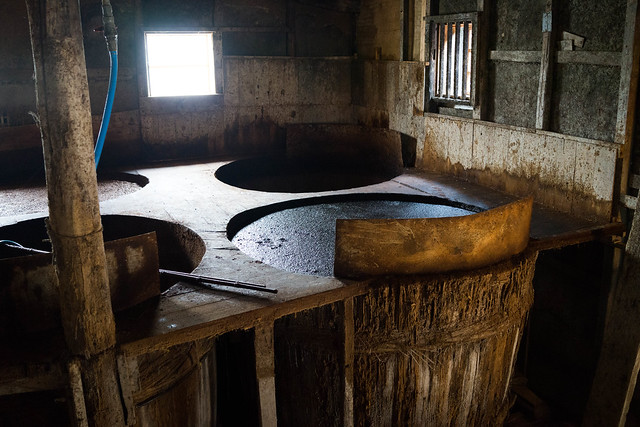 There are four notable varieties.

Lǎo chōu (“mature drawn”) is a darker and slightly thicker sauce made from light soy sauce as a result of prolonged ageing and may contain added caramel colour and/or molasses to give it its distinctive appearance. Used mainly during cooking, as its slightly sweeter and less salty flavour is enhanced by heating.

Jiàng yóu gāo is a dark soy sauce that has been thickened with starch and sugar and occasionally flavoured with spices and MSG. Used as a dipping sauce in red cooking because of its its sweetness and caramelised flavours.

Xiā zǐ jiàngyóu known as “shrimp” soy sauce. It is a fresh soy sauce which has been simmered with fresh shrimp and finished with sugar, baijiu (a type of distilled liquor, 白酒), and spices. A specialty of Suzhou.

Moving on to Japan

Soy sauce (Shōyu) is traditionally divided into five main categories according to their ingredients and method of production. Normally wheat is a primary ingredient, which tends to give Japanese soy sauces a slightly sweeter taste than those associated with China. Also small amounts of alcohol acting as a natural preservative are sometimes added giving an alcoholic sherry-like flavour.
Koikuchi (“thick taste”) is the typical Japanese soy sauce made from roughly equal quantities of soybean and wheat. Used in marinades as well as for dipping and in stir fries.   Usukuchi (“thin taste”) is both saltier and lighter (arising from the use of amazake, a sweet liquid made from fermented rice). Particularly popular in the Kansai region. Used to season ingredients.
Tamari is darker in appearance and richer in flavour than koikuchi. containing little or no wheat. Also known as miso-damari as this is the liquid that runs off miso as it matures. Made mainly in the Chūbu region. Used as a dipping sauce.

Shiro (“white”) has a light appearance and sweet taste as it is made mostly of wheat and very little soybean. Used in the Kansai region as a dipping sauce for sashimi.
Saishikomi (“twice-brewed”) is much darker and more strongly flavoured as a result of replacing the saltwater brine in the fermentation stage of koikuchi with a previous batch of already brewed soy sauce. Also known as kanro shōyu or ‘sweet soy sauce’.

All varieties and grades may be sold according to three official levels of quality dependant on nitrogen content:- 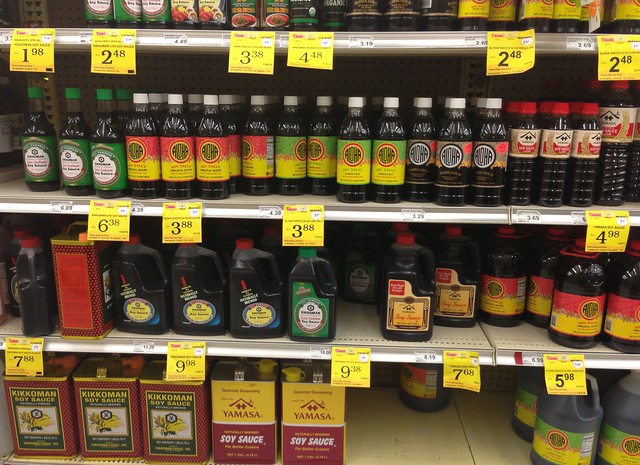 Soy sauce varieties are produced in a number of other Asian countries.   In Indonesia there are three main varieties of Kecap.   Kecap manis is a sweetened soy sauce with a thick syrupy consistency and a treacle-like flavour arising from the addition of palm sugar, star anise, galangal and other aromatics. Used as a flavouring.

Kecap manis sedang is a medium sweet soy sauce, less thick in consistency, less sweet and has a saltier taste than kecap manis.

Kecap asin is derived from the Japanese shoyu but is usually more concentrated with a darker colour and stronger flavour.

In addition there is Hakka soy sauce which is made from black beans and is very salty.

It is categorised by its method of production, as follows:-

Depending on the period of ageing, hansik ganjang is also divided into three main varieties: clear, middle and dark, as follows:-

Gaeryang-ganjang is classified into four categories by method of production.

Brewed soy sauce – made by fermenting soybean, soybean meal, or other grains with saline solution.

In the Philippines Toyò sauce is usually a combination of soybeans, wheat, salt, and caramel colour. It is thinner in texture and has a saltier taste than many of its Southeast Asian counterparts.

Varieties of soy sauce can be found also in Malaysia, Thailand and Vietnam.

Despite this not inconsiderable range of commercially available sauces artisanal soy sauce producers are developing new products including a fifty year old aged sauce but you will need to be patient as this will not be available until 2039!