LUXURY OR STABLE? THE POLEMIC OYSTER

Oysters are considered at the height of gastronomic sophistication. Nothing symbolises luxury more than a platter of oysters and caviar followed by champagne. This does not mean that everyone loves this delicacy. In fact many would say there is nothing more disgusting and pretentious than a load of oysters. They are surprisingly common in many parts of the world and seen as a relatively humble and abundant ingredient. This goes against the hyped up image of exclusivity that many inner city oyster bars try to portray.

The oyster family (ostreidae) comprises a number of distinct bivalve molluscs. They either live in marine or brackish habitats. Generally speaking there are two types of oyster (true or pearl) with the former being edible.

From all the hundreds of oyster varieties they all come from only five species. The Pacific Oysters, Kumamoto Oysters, European Flat Oysters, Atlantic and Olympia Oysters. Each oyster species are defined by a unique looking shell.

An oyster is basically a mollusc with a hard shell that ranges from black to white in colour, with a soft inner gooey centre (the edible part). It is challenging to open an oyster and needs to done with care and persistance. 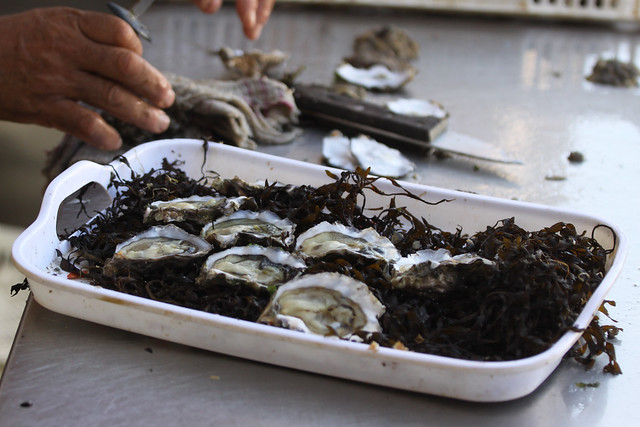 Nutrition benefits of oysters have long been a strong reason to eat them. They are an excellent source of zinc, iron, calcium, selenium and Vitamin A + B12.

Each species of oyster has a different flavour profile depending on how much salinity it has, the mineral content and nutrient variations. It relies heavily on the external conditions it grows in. Generally speaking an oyster will taste rather salty, a slight sweetness, minerally and rich. Its texture has a characteristic slimey quality that usually is the factor that disgusts so many people about eating it. The best flavour profiles are often found in younger oysters and obviously eaten as fresh as possible. This crucial as you are eating an ingredient that is essentially still alive. 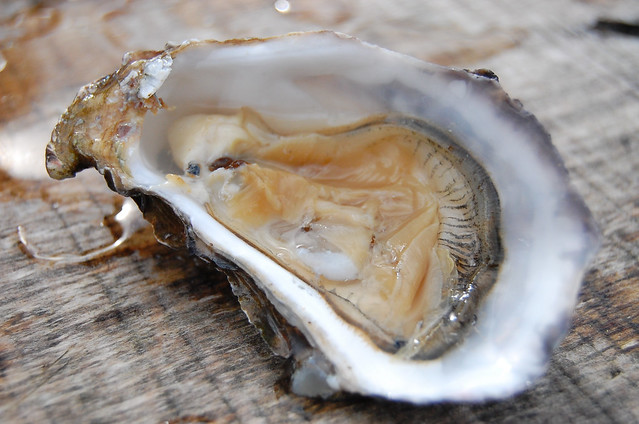 Most oyster eating purists will insist that they should be eaten raw with a little salt or lemon to taste as well as a knob of butter. The magic of a delicious oyster is it’s simplicity. Having said that oysters can be cooked in other ways to produce excellent results. Steamed, baked and even fried all create interesting variations of this delicacy.

Oysters pair really well with herbs, sharp ingredients like vinegar and lemon as well as other protein like pork and chicken. In itself an oyster is creamy and rich so ingredients that cut through this work perfectly.

Buy oysters from a supplier that has a good reputation.
Oysters must be eaten or cooked alive to reduce any health risks and for the best flavour profile.