The biggest fruit in the world!!

It is truly spectacular and dangerous as it holds the record for being the largest tree born fruit globally (they can reach 80 pounds).

With its origins in tropical south and southeast Asia the jackfruit has become popular in many countries around the world. Present day it is found in its native regions, East Africa and Latin America. It is truly spectacular and dangerous as it holds the record for being the largest tree born fruit globally (they can reach 80 pounds).

Belonging to the Moraceae it is closely associated with the pacific fruit Breadfruit but is actually a separate species. Both fruits are considered as potential solutions to food security as they are plentiful and rich in fibre. The more famous Durian is often mistaken for a Jackfruit as well.

Jackfruit is not exactly regarded as a must try fruit to be honest. It has a strong aroma that can be described as something between pineapple and banana as well as a flavour that mixes the same fruits as well as mango and apple when ripe. It is naturally sweet but subtle. The overriding feeling from eating a jackfruit is the starchy and fibrous quality.

Jackfruits come in various forms from hard to soft but also ripe and unripe. This is an important distinction because the flavour profiles are quite different. Compared to the ripe fruit, unripe has a more meat-like flavour that is mild and often finds its way into curries.

In India, Nepal, Sri Lanka and Bangladesh and the countries of South East Asia both ripe and unripe jackfruit are used. Ripe jackfruit is used with desserts as well as mixed with ice or added to ice cream.

Unripe jackfruit is made into a jam/chutney or added to curry. It is seen as a savoury ingredient. In Indonesia it is used as with coconut milk as gudeg, in Thailand it is added to a Northern salad called tam kanun and in West Bengal it is used as a vegetable to make various spicy curries. Because of its savoury nature, unripe jackfruit can be combined with spices extremely well.

The seeds can be considered as an ingredient in themselves too as they are often fried or freeze-dried then sold as jackfruit chips. They have a milky sweet taste compared to Brazil nuts. 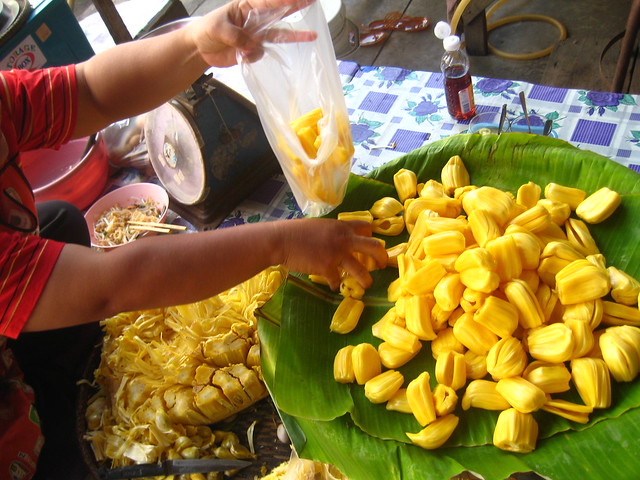 Look out for jackfruit pulp that has not been discoloured or fruits that have extremely strong odour akin to a Durian. These are probably way too ripe and going over.