PERCEBES – A DELICACY LOVED IN THE IBERIAN PENINSULA

The goose barnacles come from the order Pedunculata and comprise of various species. Also known as stalked barnacles, gooseneck barnacles or the culinary popular/spanish name ‘perceives’.

This particular barnacle deserves its own flavour profile. It is probably the most highly regarded barnacle on the culinary scene right now. In Portugal and Spain they are really popular especially in the northern coastal regions. The Galicians and Asturians cannot get enough of them and over in Alentejo in the southwestern Portuguese coast. Goose barnacles are found not only in this region but also in Morocco, Canada, Chile and parts of the US coastline.

Basically these barnacles are filter-feeding crustaceans that spend their life attached to hard surfaces of rocks and anything else they can partially submerged in crashing waves half the time. Exceptional flavour but pretty bizarre looking. This goes a long way to explain why they are not globally popular. Getting over the ‘weird’ factor takes time and good marketing. Even to this day there are a millions who would not even go near an oyster. Despite this the popularity of the goose barnacle has risen consistently as global appetite for new flavours increases.

When fully mature they have a thick trunk with tinges of rose on the inner tube. At one end it has the head that attaches to a rock or any surface it can and the other a dinosaur claw liked foot. When high tide arrives it uses tiny pink tendrils to filter the seawater to feed. 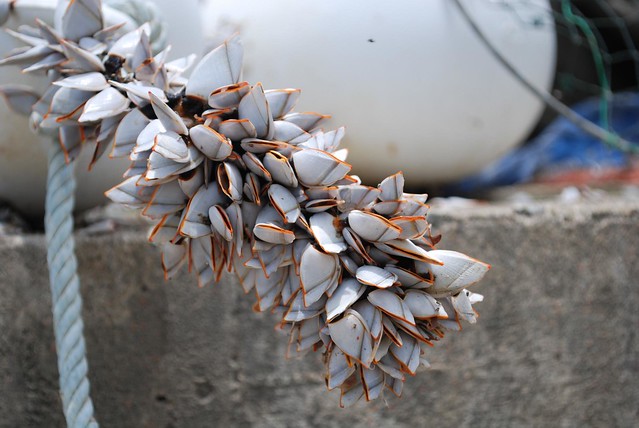 Goose barnacles are really tasty. That is the general consensus of anyone who loves seafood. A lot of people think that if its a barnacle they must taste like rubber. This really could not be further from the truth in the case of percebes. Their flavour profile is one of lobster combined, the texture of oyster and the saltiness of the sea. It really is a king of the culinary world for those that cook it.

SCIENCE OF THE GOOSE BARNACLE

While not particularly rich in nutrition it is certainly is not bad for you. Clearly in the case of this ingredient the health benefits are outweighed by the culinary importance.

GETTING IT READY TO EAT

Goose barnacles are using found at the source (i.e. in fish markets) on the coast or in higher end restaurants. If you do find them  do not turn down the opportunity. They grow in very wild regions and are actually dangerous to harvest so the chances of finding them at a market are rare. To collect the percebes, percebeiros often have to descend down climbs and then face strong waves as they try to hack off each goose barnacle. High risk, a delicious flavour and a limited cultivation all adds up to an expensive ingredient. Really they should be eaten as soon as possible but you could hold onto them for a couple of days before cooking them up.

Despite its intimidating appearance eating it is straightforward. Pinch the foot and pull the inner tube out of the case with a twisting motion to break it away. The goose barnacle is amazing as a warm snack. A coastal version of tapas we could say. Traditionally, they are boiled for a short time along with some salt and a bay leaf. This is served pipping hard with a napkin. These delicious crustaceans need nothing else to taste incredible.

The first time I ate barnacles, I was in Chile where they are called picorocos and served on their own or in a seafood stew called curanto. They have a unique flavor, but are in some ways reminiscent of lobster and crab. 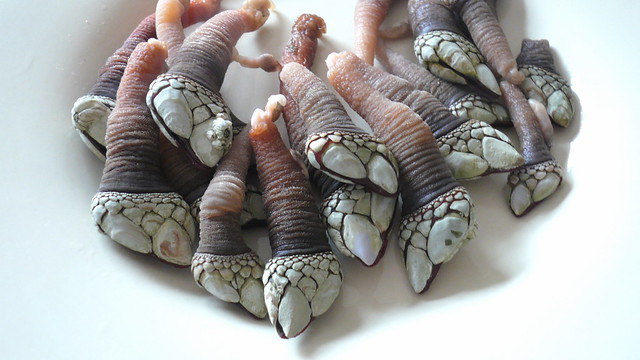 Obviously like other crustaceans they do combine really well with a multitude of ingredients. The reality is though like oysters you should try them on their own with a little enhancement – some salt.