APPARENTLY NOT. IT’S ORIGIN GOES BACK TO ANCIENT TIMES

The word croissant instantly makes us think of France. That is indisputable. The buttery, flaky pastry in a crescent form is quintessentially French. Think again. The reality is that the croissant has a distant ancestor, the Austrian Kipferl which dates back to at least the 13th century.

Around 1838/1839 an Austrian artillery officer founded a Viennese bakery that served many specialities including the kipferl. This inspired many French imitators that eventually developed the crescent shaped (croissant) that has spread around the world. By the late 19th century the croissant was well established as a breakfast staple.

The modern day croissant is made of a layered yeast-leavened dough. Basically the dough is layered with butter then rolled and folded many times into a sheet (called laminating). Similar to a good puff pastry, the result is a flaky layered texture. To make an excellent croissant you need sugar, salt, flour, milk, eggs and butter. 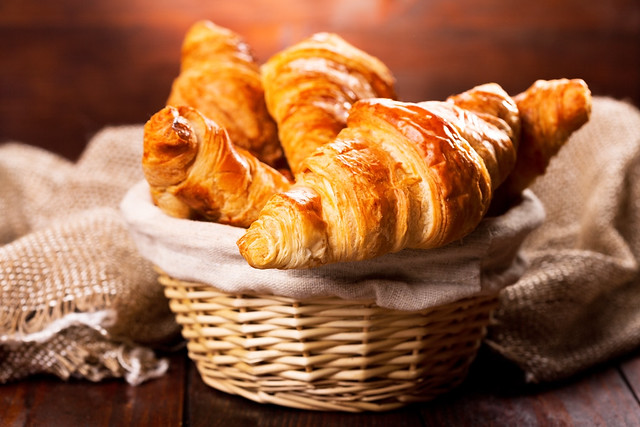 VARIATIONS AROUND THE WORLD

In France and Spain croissants are normally sold without filling and no butter but sometimes almond is added while Nutella or persipan are put inside German croissants.

In the US sweet fillings are sometimes added as well as filled with a multitude of ingredients including feta cheese, ham and spinach.

If you ask for a croissant in Argentina you might be met with a blank face. They are known as medialunas (half moons) and are typically coated with butter which can be sweet or salty. In other Spanish-speaking countries, a croissant is often called a cuerno (horn). Makes sense.

Whether you want to see croissants as French or Austrian is a matter of preference and interpretation. The reality is French culture has made them the world famous breakfast pastry we love.