Annatto or achiote (Bixa Orellana) is an essential ingredient in various cuisines. Throughout Latin and Central America it is often found in markets (especially Mexico) and also in Asia. Many people do not realise that annatto is present in many of the every day foods they consume. More often than not its used to add a distinctive orange/yellow colour to various products including butter, smoked fish and many cheeses (Cheshire, Leicester, Edam and Muenster.)

Its origins are disputed with one theory that it is native to Brazil while others believe it to be from the Caribbean and Central America. This shrub has fruit capsules that are heart-shaped and red prickly spines. Once ripe, it splits open to reveal about fifty seeds encased in red pulp. Really a very bizarre but fascinating fruit. The seeds of annatto are really attractive red triangles about 3-5mm across. These can be bought whole or purchased as a paste or block form. 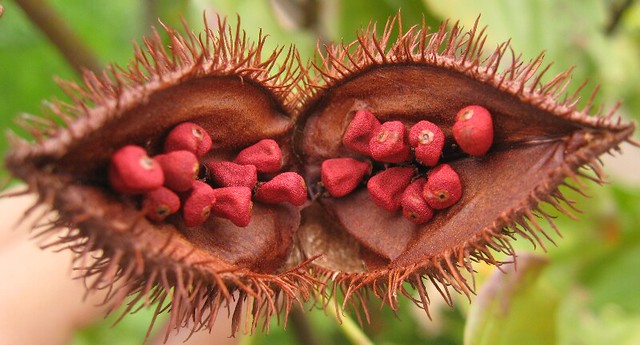 Defining the flavour profile of annatto can be a little tricky as it is pretty subtle. It is sometimes described as slightly peppery with a nutmeg like aftertaste. We feel it has a chalky crunch to it and an earthy almost nutty quality that is hard to find in other ingredients that pack the same colour punch.

The colour of annatto comes from various carotenoid pigments, mainly bixin and norbixin which are found in the waxy coating of the annatto seeds. The more norbixin in an annatto colour, the more yellow it is; a higher level of bixin gives it a more orange shade. Annatto is also a source of tocotrienols that has a similar structure and function to the antioxidant vitamin E. It is said to have positive effects on cancer treatment.

GETTING IT READY TO USE

You are probably never going to see annatto seeds that have not been already processed ready for sale. Before they get to the market, the ripe fruits are collected then macerated in water and dried separately from the pulp of the pod. 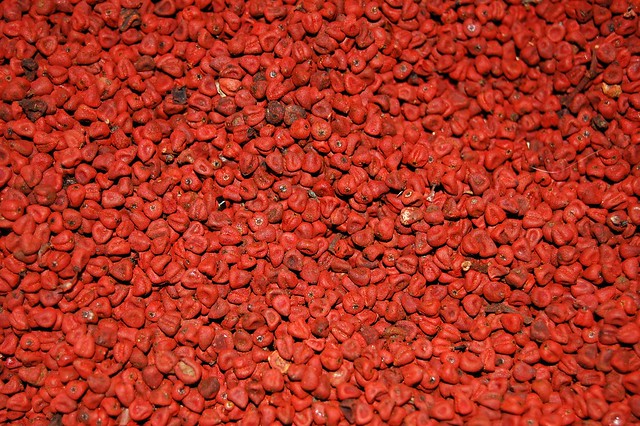 Either you can throw them into a cooking liquid straight away or create an infusion with it, then add it to stocks or to colour rice. Another approach is to fry the seeds in oil for a few minutes in a covered pan. In a similar way to popcorn, the seeds can pop and fly across your kitchen. Best to cover them. The flavour and colour of the annatto seeds will release into the oil creating a final result similar to the colour of melted palm oil. (Really great to add a striking colour to your cooking).

If you are looking for two cuisines that really do take annatto use seriously, Mexico and the Philippines are the star countries. A Mexican classic is Cochinita Pibil in which annatto is used to add an unmistakable red hue to the dish. The sauce recede rojo in Yucatán and sazón in Puerto Rico also use it.  Filipinos love using it in many dishes including ukoy, pipian, pancit and kari-kari. Annatto is also used to colour soups, stews, and spice rubs especially those of Spanish origin. In Venezuela hallacas and perico include it too.

In terms of its flavour, annatto goes well with other ingredients that can benefit from an enhancement. Proteins and carbohydrates like rice, chicken, pork, shrimp and plantain can really get a kick from annatto. Combining  this with its interesting colour annatto has found its way into numerous dishes. Smokey/nutty ingredients like cheese, dried chilis, garlic and peanuts pair especially well with it.

Buy annatto that has a slight aroma and a deep red colour.

It is worth crunching the seeds to release maximum flavour and colour. If you do not have the patience get annatto already in paste form as often the annatto you get in a market might have become slightly hard with time.