Right up there with lobster and oysters for gastronomic importance, abalone meat is highly desired around the world and limited in supply. The flesh of abalones is widely considered to be a desirable food, consumed raw or cooked in a variety of cultures.

Abalones comprise a large number of marine gastropod molluscs in the Haliotidae family. The number of species ranges from 30-130.

They have a thick inner layer of the shell famous for being the mother of pearl, highly iridescent and spectacular used for decorative purposes.

The abalone market has suffered from overfishing due its gastronomic importance. It is considered a delicacy and luxury in many countries especially France, China, Vietnam, Japan and Korea.

The foot of the abalone is what we are really interested in. It lies flat against a surface protected by muscles. When it is pulled away the muscle retracts to protect its foot. A single shell protects the mollusc. 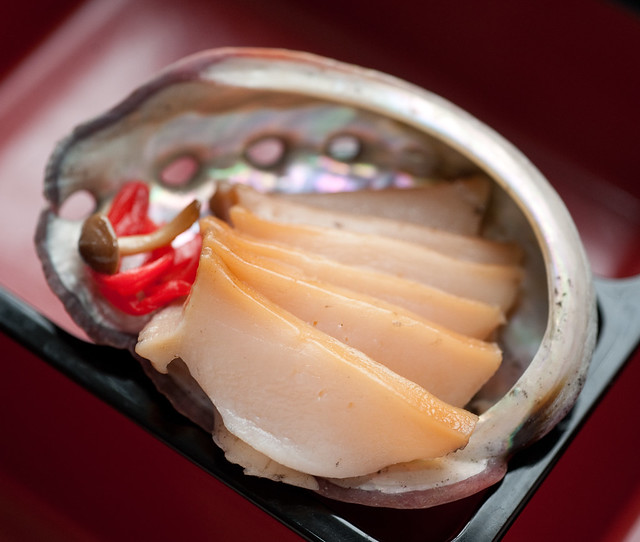 The mollusc Concholepas concholepas (loco) is often sold in the United States under the name “Chilean abalone”, though it is not an abalone, but a muricid. Its obviously very popular in Chile especially around the port of Valparaiso.

The largest abalone is found in South Africa, Haliotis midae while Ormers (Haliotis tuberculata) are considered a delicacy in the British Channel Islands and coastal regions of France.

If you like scallop and squid, abalone is for you. Its texture is very similar to them with a crunch like sensation found in conches. It has a certain firmness and chewiness that proofs very attractive either eaten raw or cooked. As Abalone is cooked it has a sweet, creamy and salty flavour also found in clams and lobster.

Abalone can be eaten fresh/raw or in frozen form. In both forms they should have little to no aroma. Live abalone should respond when touched as this is a sign of freshness.

PREPARING AND COOKING AN ABALONE

Abalone meat must tenderised with a mallet before eating. Using a sharp knife the foot can be removed from the shell by cutting through the connective tissue. The darker portions near the head, gills and viscera should be removed then the abalone needs to be cleaned well with water.

The abalone should be treated the same as a scallop. Cooked for no more than 1-2mins on each side in a very hot pan with some oil then served immediately. Cooking it any longer can leave it tasting more like a shoe than seafood.

Abalone (awabi) is really popular in sushi dishes. It has a rubbery texture in raw form that is often preferred over the cooked texture. Abalone is often used in sushi dishes as the meat toughens when cooked. It can also be served steamed, salted, boiled or simmered in soy sauce. In California Abalone is often added as a pizza topping while in Chile they serve it in a gooey cheese and bread seafood stew called Chupa de Loco.

When purchasing an abalone ask if it has been already tenderized. If it has doing it more will most likely ruin the meat.

Make sure the abalone comes from a source you trust. There are a lot of imitations.

If you just bought fresh abalone it is recommended to eat it the same day. Alternatively it can frozen to be used within two months.